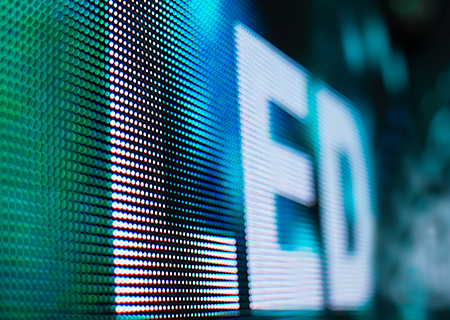 What are LED Signs?

“LED” stands for “light-emitting diode”. LED signs are signs that are illuminated with perhaps the best lighting technology known to date.

LEDs have quickly become an incredibly popular style of illuminated sign. LED signs last longer than other illuminated signs because LED bulbs last longer. If you’re wondering what kind of lighted sign to get for your Redford business, most cost-saving analyses have LED signs winning out over time.

LED signs can also shine brighter than any other type of lighted sign, so they’re great for commercial and corporate signage. Any sign that needs to stand out at night or in a crowded Redford street should probably be an LED sign.

Why Choose Us for LED Signs in Redford, MI?

Illuminated signs cost more than non-lighted signs, so you want to get them right. SignScapes is proud to design and manufacture eye-catching and durable LED signs for our clients in Redford, and elsewhere in Michigan.

Benefits of Choosing Us for LED Signs in Redford, MI

LED bulbs last longer than neon or fluorescent tubes and they absolutely dwarf the lifespan of incandescent bulbs by lasting up to 25 times longer! LED signs are also much more efficient than other types of lighted signs because LED bulbs focus more of their energy on light and less on heat, meaning they aren’t a fire hazard. If you are in Redford, or elsewhere in Michigan and would like to learn more about LED signs, please contact us.